“What’s Wrong With Me? Absolutely Nothing.”

On this page:
The TEDx team’s description of Gabi’s talk
Introductions to Gabi and her talk
About the 2014 TEDx San Diego
Reviews of Gabi’s talk
Photos of the talk 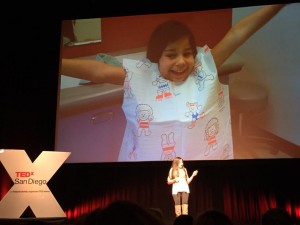 Gabi gave her first TED talk at TEDx San Diego on November 8th, 2014. She was in her element: lively, funny and unrepentantly herself, she took the 1,300-person audience from tears of emotion to hearty laughter, evoking a powerful standing ovation at the end.

TED teams spend many weeks editing their talks before they are released. The TEDx San Diego team made a point of working on Gabi’s talk and releasing it first, as they considered it to be one of the most popular talks. Here is how they described it when they released it:

We wanted to start the new year off right with one of the audience’s favorite talks from TEDxSanDiego 2014.

Gabi Ury, who became the world female planking champion at age 16, was born with special needs that affected her spine, legs, feet, and a number of her internal organs. Although she has endoured 15 major surgeries and related physical challenges, you would never know it by her graceful and playful presence on stage.

Gabi talks about the continuous support from her family and friends throughout childhood and her desire to someday make it into the Guinness Book of World Records, a desire made more real when she discovered her ability for planking. Gabi’s closing message says it all: “You should never underestimate yourself.”

Introductions to Gabi and her talk 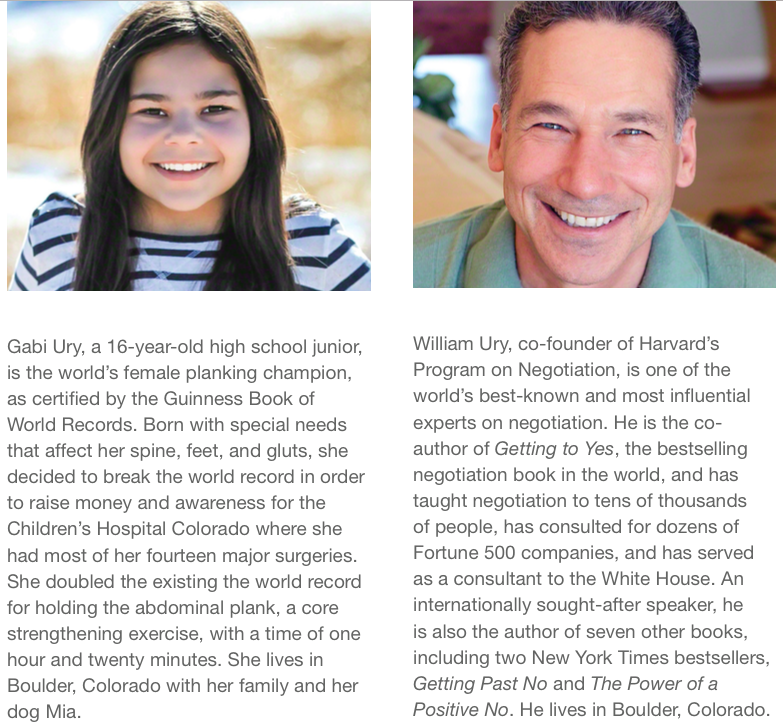 Gabi’s and William’s descriptions on the TEDx Program

Sonia Rhodes, a TEDx San Diego organizer, introduced Gabi, saying, “A mighty energy is about to take this stage. Gabi Ury helps us all remember that we can choose the kind of difference we want to make in the world.” Watch the unprofessional footage here.

Ahead of her TED talk, on November 7th Gabi aired on the San Diego Living show, of San Diego’s channel 6, where Gabi was interviewed along with two other speakers and an organizer at TEDx. Watch it here >>

To the right is the description on who Gabi is, as presented in the info packet for TEDx San Diego (download the full info packet here). 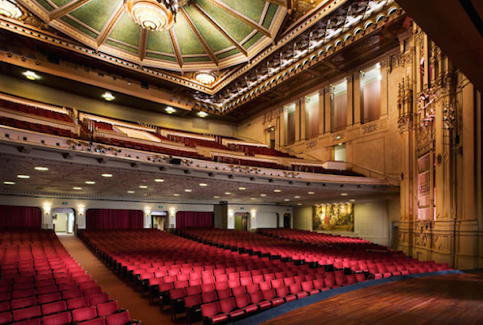 The Symphony Hall at San Diego

The event took place at the San Diego Symphony Hall. There were three sessions, each with five speakers. Gabi spoke at the third session on “What’s Wrong With Me? Absolutely Nothing.” William Ury, Gabi’s father, spoke at the second session on “The Power of Listening.” (William had given a previous talk at TEDx Chicago on October 2010, where he spoke about negotiation, the third side, and the Abraham Path Initiative.)

This year’s theme for the TEDx San Diego was Chain Re•ac•tion, which according to their website “speaks to the ways in which one person is able to affect the lives of many through their thoughts and actions, as well as how technology can alter the way in which we communicate & interact with one another, thus changing the fabric of our society.”

TEDxSanDiego brings together a collection of innovators, explorers, visionaries, teachers and learners, then seeks to illuminate, inspire and activate each of those individuals as a way to foster conversation, collaboration and action. Our vision is to be a forum that encourages and facilitates the unleashing of ideas which have the power to change our world.

Here is one, from Never What You Think™:

This is one of those touching stories you’d see on Oprah or Ellen – a girl born with a physical condition that is supposed to limit her grows up fearless and achieves her dream of getting in the Guinness Book of World Records for Longest Abdominal Plank. As we are strong advocates for individuals with disabilities, we were touched not just by her attitude and story of perseverance, but even more by the support she received from friends and family because that is a huge part of the equation for those with disabilities. It’s truly the support (and some serendipitous moments) that makes these stories succeed.

Here is an article by James Altucher, who spoke right after Gabi’s talk. After discussing Gabi’s story, he writes:

When [Gabi] finished, someone was introducing me so I still had a few seconds.

She walked right into the arms of her father. She hugged him as tightly as possible. I can’t get the image out of my head. Her whole life he’s been there for her.

She broke the world record because someone loved her that much. Because many people were kind to her. Because he cared. Because she cared.

Persistent kindness is heaven. I hope I can be kind all my life.

Her face was buried into his chest and she held onto him for life. He was looking down at her and smiling and he hugged her back. It’s hard at 16 to give a talk to 1300 people. To bleed on the stage. To make people cry and smile at the same time.

I kept watching them hug.

I didn’t listen to the person introducing me until someone said in my ear, “Ok. Go!’ And I was supposed to walk onto the stage.

But it’s rare when you can pull such a love out of this harsh and chaotic universe. I stood there a few more seconds and watched Gabi hug her father.

Her father, by coincidence, has written a book called “Getting to Yes”. Similar title to the book Claudia and I just wrote, “The Power of No”. Someone said to me that it was similar themes.

I do remember the last thing Gabi said before she got off stage. The final moments of her talk.

She said: “Sometimes people ask me, “What’s wrong with you?”

Photos of the Talk

Below are some pictures of Gabi during her talk. Professional pictures and footage from the TEDx team will be posted here in late December or early January 2015.